Walt says about his work with 'The Dust Collectors'.

"I first came across 'The Dust Collectors' around 2003. I was impressed by their original and idiosyncratic sound and approach. I was delighted to join 'The Dust Collectors' in early 2005, playing percussion, electronics and also using my voice a lot! At the time the two founder and leading members were Lorin Halsall and Jerry Hope, two very inspiring characters. Sadly Jerry died in 2008, but for us all he remains a lasting inspiration as a wonderful, charismatic and creative figure.

Since 'The Dust Collectors' folded a few years back, I have continued musical and other creative episodes with both Lorin and George Harris, who now lives in London. I have done several gigs wih Lorin in different groupings. I found my work with The Dust Collectors, not only tremendous fun, but it helped inform some of my own personal projects. The band had a superb open approach to creativity, stepping as true mavericks across different boundaries, often too across disciplines. I cherish my period of work with them."

The Dust Collectors are a maelstrom of warped grooves, strange beats and vaudeville pop with just a wiff of free jazz and cantankerous experimentation.

Described by some as being "...like the house band of a Victorian asylum in a David Lynch movie. Visually and sonically stunning, the Dust Collectors stroll the line between genius and insanity."

The Dust Collectors began their glorious path to musical weirdness amidst a deluge of rain, a broken down Dragon (Mechanical) and a delapedated flea circus.

In 2002 they were two, but collected members along the way to form a twisted orchestra designed to explore the diverse realms of performance using words, sonics and the cinematic.

Past ventures have seen the Dust Collectors:

• Collaborate with Film Makers and members of the Magic Circle to construct an original theatre performance to coincide with Quad, Derby's major arts organization's exhibition on the theme of magic.
• A week of collaboration with Pat Thomas (International Pianist and Free Improvisor)
• Orchestrating and performing live soundtracks to the silent films of Murneau's 'Nosferatu' & Hitchcock's 'The Stranger'.
• Writing / producing their own films and playing live accompaniment to 'The Steam Priests' and 'The Men Without Eyes' with filmmaker and musician Jon Samsworth.
• Creating a soundtrack to Shadow Puppet narratives in a collaboration of strange theatre within the context of Derby's Festival of Arts event. 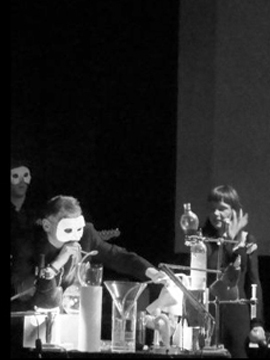