Walt is a freelance musician and artist from near Derby in the Midlands. Walt's creative energies are equally divided between visual arts and his music as a percussionist. He has been involved in a host of arts projects for the last 32 years. Prior to becoming a freelance musician and artist he was, for 14 years, Head of Biology in a large Comprehensive near Burton-on-Trent. This was after teaching in Lincoln and northern Nigeria (VSO). His projects have ranged from exhibitions of paintings and sculpture, both solo and group, to installations, to cross-disciplinary collaborations with dancers and physical performers. In these latter projects his experimental percussion and low-tech electronics have always played a significant role.

In 1989, Walt, along with the artist Kevin Burnley, co-founded the artist group BET4. They exhibited widely in the Midlands and in Germany and Paris. By 1993, the group widened in scope, becoming increasingly involved with not just exhibitions but installations, live art and cross-disciplinary projects. These usually integrated elements of contemporary dance, live sound and physical performance along with a strong visual aesthetic. This gave Walt opportunities for experimenting with percussion in unusual contexts as well as the creativity of that visual aesthetic. Performances took place throughout England as well as Scotland, Paris and Germany. The work of BET4 had a profound influence on all the subsequent solo and collaborative projects Walt has been involved with. 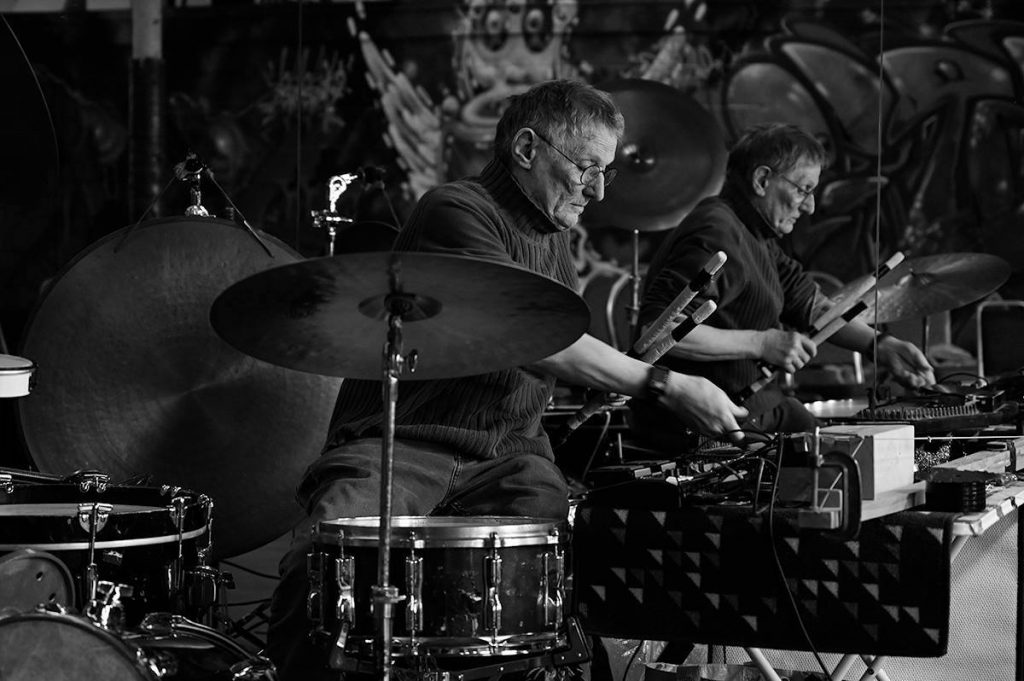 Playing at the final live gig of Corey Mwamba ( the sequestering ) on March 23rd , 2019. Thanks to Brian Homer for the photo.

Walt has enjoyed 3 major Arts Council England awards for projects. These were for 'Polarities', 'Timepoints' and 'Entropic'. Along with the artist Simon Piasecki he also carried out the A.C.E. project 'Mendel's Garden'. He has been a collaborative artist in many other A.C.E. projects. Details of all these can be seen in the 'Live Art / Cross-disciplinary' section.

Education has played a significant part in Walt's work, even after 1989.

He has carried out many workshops in both art and percussion in Primary, Secondary, F.E. and H.E. in the Midlands and the North. He has been an artist-in- residence at Melton Brooksby College in 2005 and Abbot Beyne School, Burton-on-Trent in 2009. Walt ran Creative Percussion Discussion in Derby from 2004 through to 2005, working with youngsters under the auspices of Derby Jazz. In 2006, Walt was a tutor in a Clore Duffield Foundation project working with teenagers in Belper, using an old car as a source for art, percussion and performance. 2006 saw a project alongside the inspiring musician Orphy Robinson, working in schools to make instruments from scrap objects and improvise with them. This was a Creative Partnerships project.

Walt has played with many leading improvising musicians from the U.K. and abroad and is presently playing in several bands (see 'Music') whilst still producing visual art ( see 'Visual Art'). It is fair to say he has an unease about specialism and arbitrary categorizations. His creative development over the years has always been very difficult to pigeonhole. His creative process is the same whatever the medium though, involving searching, experimentation, expression, pushing the boundaries and refining.